EartH Fridays East Sessions (EFES) invites you to join Roxxxan for the after hours event following Jay Electronica. Complimentary DJs will be playing all night to keep the vibrations high.

RoxXxan is a “fierce and gifted” MC hailing from Birmingham. She regularly swings hooks in the boxing ring for fun and has proved to be a serious contender with her knock-out lyrics on tracks like “Boxing Ting” and “Heavyweight” which featured on the Shank soundtrack. Floating like a butterfly on the live circuit, her fusion of dubstep, hip hop and grime lyrics stung as she sparred alongside respected MCs like P Money on sets with Goldie, Skream, Benga and Caspa.

With the same passion she had for music when she started her set back in 2004, she is here to stand for something and own it. Understandably championed by the likes of Radio 1 DJ Zane Lowe, DJ Target (1Xtra), Swerve (Kiss) and MistaJam (Radio 1/1Xtra) RoxXxan’s work has won-over the ears of some of the most hardened MCs.

Describing herself she says “I’m a female boss, I keep it grimey, I don’t do it like a dude, I do it like me *insert ” re emoticon*”. She’s worked with some of the hottest producers including Yogi, Tms, Bless Beats, Wiley, Sunny, Donaeo and Riton.

DJ/ producer & co-founder of East London lesbian club night VIBRATE. Tayylor is a regular at Pxssy Palace, with DJ slots at Lovebox Festival, Ministry of Sound, UK Black Pride & Pride in London. She specializes in hip hop and underground club sounds including trap, Jersey club & future beats. She has recorded with major artists including Kano, Yxng Bane & Roxxxan among others. 2019 has seen a focus on producing her own original music.

KINGBOO is a Brooklyn-born DJ whose sound incorporates everything from eclectic club to underground dancehall bootlegs. A Glastonbury veteran, her incendiary sets have taken her across the UK and the States where she routinely shuts down huge festivals and intimate venues. KKINGBOO’s sets draw inspiration from a wide range of sources. Deeply personal experiences, her diasporic roots and a sprinkle of ADHD. Mixing and blending everything from tropical trap to cunty industrial house – her sets aren’t one to miss. You can find her spinning to a wildly receptive crowd once a month at PxssyPalace London. 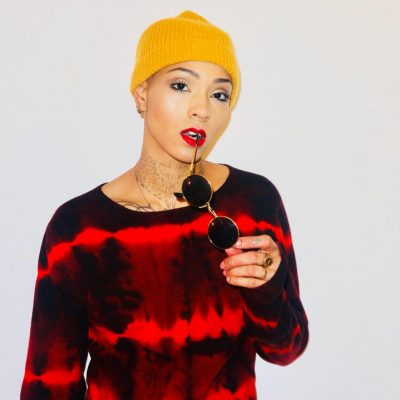