NYC dance-punk band !!! (chk chk chk) have been chronicling the perpetual meltdown that is American society for nearly 20 years now, from the clattering full-band thrust of their instantly iconic 2003 single “Me and Giuliani Down by the Schoolyard (A True Story)” to the dark disco of 2017’s wonderfully eclectic Shake the Shudder.

Their eighth full-length, Wallop, follows in the band’s grand tradition of plugging straight into our collective nervous system and sending funky, rubbery shock waves through the body politic. If you’ve found yourself rubbing your temples while contemplating the collapse of everything around us? Well, !!! are bringing the soundtrack to your next nervous breakdown.

Like an apocalyptic jukebox, their new record is jam-packed with various sounds and styles from dance music’s rich history—from the pie-eyed psychedelia of Madchester-era English dance-rock to tunnel-vision techno and the flashy, bomb-dropping sound of UK grime.

Anyone who has seen the band live would say they brought the ultimate party – whether an intimate in store performance, or their show at EartH, one of their biggest UK headline shows to date, the Brooklyn outfit fill the room and audience with an infectious energy. For anyone who’s not seen the band before: we’ll just say short shorts are involved, and will leave it there. They headline EartH around the release of Wallop; get a ticket or two to discover what we’re on about. 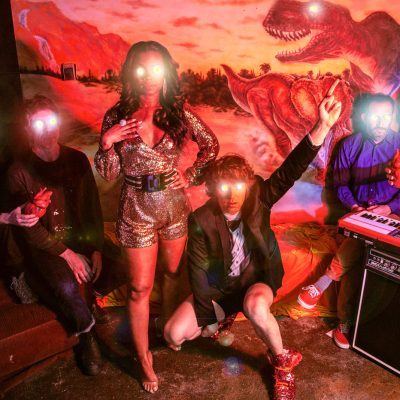