Benji B returns to London with one of the capital’s most celebrated club nights: Deviation.

While the philosophy has always been open-ended, the Radio 1 host is well known for forward thinking curations of inspired and eclectic sounds from the house and bass spectrum.

Joining the Radio 1 tastemaker will be none other than the Detroit legend Moodymann, Waajeed and your host Judah.

Fresh off the back of his latest release, ‘Sinner’, Kenny Dixon Jr. aka Moodymann heads up the night, offering an elusive glimpse into his rich heritage and environment, which emanates across the dance floor. Joining him is fellow Detroiter, Waajeed, who celebrates his forthcoming EP ‘Hocus Pocus’, out on Deviation October 18th.

In a city where club nights are a dime a dozen, Deviation has consistently stood head and shoulders above a saturated market. With steadfast principles and always doing things the right way for the right reasons, Deviation started out life at Gramaphone, growing via Concrete, XOYO, Mick’s Garage and Village Underground, to the present day where it holds status as one of the most respected club nights in London – with a strong, devoted fanbase to follow. This session at EartH should be very special indeed. 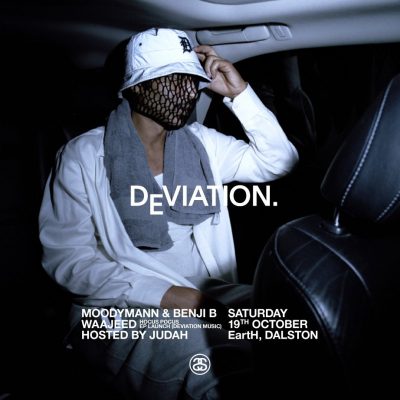