Celebrating the South Asian underground, Dialled In are headed to EartH this April, with a full venue takeover, featuring 30 artists performing across three stages, DJs, live acts and art installations – along with an after party at our sister venue Village Underground – book tickets here. Created in collaboration between UK-based collectives Daytimers, No ID, and Chalo, Dialled In’s aim is to showcase South Asian artists, and inspire the next generation of South Asian creatives by paving the way forward. Expect open decks, delicious food and chai, as well as quite a few surprises…

In the first phase of the line-up Dialled In has legendary seven-time Grammy-nominated musician Anoushka Shankar taking the stage as part of a trio that will captivate audiences. Sydney-based artist Jitwam will be performing live with a full band, playing songs from an upcoming album for the very first time while Nikhil Beats will be bringing his singular high-tempo energy to EartH’s Theatre space. HIRA, a product of the Paul Institute, will be showcasing a rare live set. India’s alt-pop leaning artist KAVYA will be bringing her renowned live performance to a UK audience while Shivum Sharma will be performing with a live band, his soft falsetto is sure to arrest audiences inside the venue’s distinguished amphitheatre. Finally, Nabihah Iqbal, Raheel Khan & Paul Purgas will be presenting SUROOR, an improvisatory set that is sure to electrify the atmosphere.

We are proud to present artists at the forefront of the UK music scene: Noudle’s deep crates will be showcased alongside the high-energy of celebrated DJs Mixtress and Maleek going b2b in a much-anticipated set. Works Of Intent will be keeping with that high-tempo energy while Manchester and Swing Ting icon Samrai will be heading down to London alongside the inimitable Gracie T and DJ Priya. Rising star Surya Sen will be performing a DJ set while Mumbai-based WorldWide FM host Aneesha Kotwani will be displaying her knowledge of music alongside fellow WWFM host Rohan Rakhit in a highly-anticipated b2b set. D-Lish and SUCHI will be bringing high-tempo dance sets that are sure to get a crowd moving, plus a special vinyl-only Grime & Dubstep Classic set from GoldTooth and My Panda Shall Fly while Ryan Lanji’s HUNGAMA will be bringing their distinctive party flavour.

Dialled In will be introducing audiences to newcomer Anish Kumar whose singular production is sure to propel him into the mainstream before long. Welcoming back Anu, Manara, Yung Singh and PXSSY PALACE who will be showcasing their broad range of tastes, yet again proving how hard it is to box in South Asian DJs. 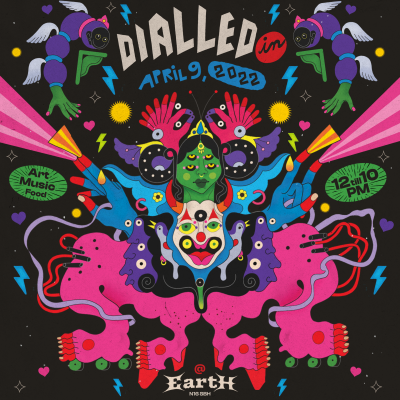