Over the course of their thirty trips around the sun, Earth has remained diligent in their commitment to monolithic minimalism. The sonic vocabulary may have changed—from their early years churning out seismic drone metal on albums like Earth 2 (1993) to the dusty Morricone-tinged comeback album Hex; Or Printing in the Infernal Method (2005) to the meditative rock approach of Primitive and Deadly (2014)—but the underlying principle of austerity and restraint remains a constant. With their latest album Full Upon Her Burning Lips, Earth purges the layers of auxiliary instrumentation that embellished some of their previous records and deconstructed their dynamic to the core duo of Dylan Carlson on guitar and bass and Adrienne Davies on drums and percussion. In the process, they tapped into the Platonic ideal of Earth—an incarnation of the long running band bolstered by the authority of purpose, where every note and every strike on the drum kit carries the weight of the world.

“I feel like this is the fullest expression and purest distillation of what Earth does since I re-started the band,” Carlson says in reflection of Full Upon Her Burning Lips. And indeed, anyone that’s followed Earth on their journey will bask in the unadulterated hums, throbs, and reverberations conjured by Carlson and Davies. 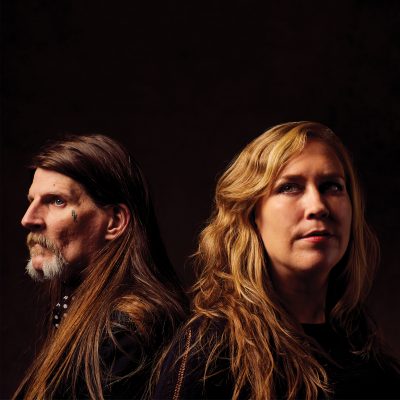