To read a list of Anoushka Shankar’s accomplishments is to read many life stories in one: masterful sitarist; film composer; impassioned activist; the youngest and first female recipient of a British House of Commons Shield; the first Indian musician to perform live or to serve as presenter at the Grammy Awards with seven nominations under her belt, and the first Indian woman to be nominated; one of the first five female composers to have been added onto the UK A-level music syllabus. Immersed from a young age on the world stage, with over a quarter-century’s performing behind her, she is a singular, genre-defying artist across realms – classical and contemporary, acoustic and electronic.

Anoushka began studying the sitar – and Indian classical music – from the age of 9 under the intensive tutelage of her father, Pandit Ravi Shankar: a master of the instrument, and a figure without whom 20th Century music would quite simply not have been what it was. After making her professional debut at thirteen, she began touring worldwide alongside her father then embarked on a successful touring career when she was 18, becoming known for her virtuosic yet emotional playing style, unusual instrumentation, and precise rhythmic interplay. Having discovered electronic music as a teenager before later immersing herself in the Goan psychedelic trance scene, she found parallels with the meditative, introspective qualities of Indian classical music in the ecstatic release of the dancefloor: using different colours to paint the same picture.

Having released three classical albums for Angel Records EMI and performed at venues such as Carnegie Hall and the Barbican multiple times by the age of 25, the switch to earthy ambience and deep textures on 2005’s Rise was fuelled by a desire “to create music that more fully represents who I am.”

Earning her a 2nd Grammy nomination, this cinematic album formed the blueprint for her intensive solo career. Notions of physical and sonic space are inverted; instruments flow into each other like merging streams; disparate systems of tuning, scale, and instrumentation are made to sound as if they were always meant to co-exist. Her follow-up album Breathing Underwater, created in collaboration with multi-instrumentalist Karsh Kale, envisioned a sonic world where ragas, bright analogue soundscapes, contemplative electronics, and guest turns by Ravi Shankar, Sting, and Anoushka’s half-sister Norah Jones could all slot next to each other without seeming an inch out of place.

Signing to Deutsche Grammophon in 2011 marked the start of a decade of unbridled fertility. Over the course of four distinct albums, each Grammy-nominated, disparate threads were woven into a tapestry, even as themes shifted and sound palettes expanded. Deep meditations of love and loss on the Nitin Sawhney-produced Traces Of You nestled against a quietly-triumphant return to pure raga improvisations on Home; the historical relationship between Indian classical music and Spanish flamenco was explored on the Javier Limón-produced Traveller whilst the current global refugee crisis informed the rallying cry of Land Of Gold. Co-written with frequent collaborator and handpan exponent Manu Delago and featuring M.I.A, Vanessa Redgrave and Alev Lenz, Land Of Gold crystallised Anoushka’s sound: a de-exotified, high-definition sitar resonating across unpredictable, genre-resistant instrumentation. Alev’s hypnotic presence is also felt on Love Letters – Anoushka’s most recent release, existing in its own universe. The co-produced EP contains startingly-beautiful turns by Ibeyi, Shilpa Rao and Ayanna Witter-Johnson and distills the raw emotions of each note, showcasing an artist who is increasingly comfortable with being vulnerable.

Anoushka Shankar has collaborated with diverse artists including Herbie Hancock, Patti Smith, Joshua Bell, Gold Panda, Rodrigo y Gabriela, Jules Buckley and His Holiness the Dalai Lama. Her touring career has taken her from legendary jazz cafes to iconic Symphony Halls and festival stages in front of 40,000 people, and her versatility transforms each of these locations into an intimate experience for all listening. That versatility comes out of years spent building the confidence to be artistically truthful and to connect to her audience from the heart. 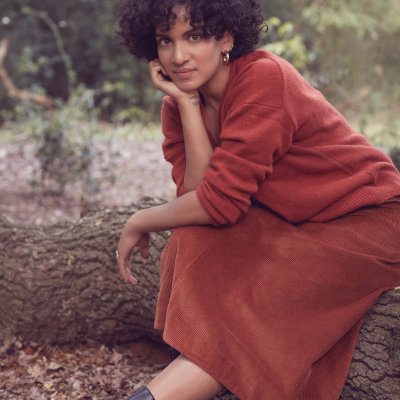