Arif Sağ (born 1945) is a Turkish singer, bağlama virtuoso, and leading figure in modern Turkish folk music. Born in Eastern Turkey, at the age of five he learned to play the kaval, a traditional flute and by six years old he was able to play the bağlama. Until he was fourteen, he learned the ashik tradition and started to sing folk poems eventually moving to Istanbul to take lessons from folk music artist Nida Tüfekçi.

The 1960s and 70s were spent soul searching for Arif, as he was trying to figure out his sound. During this period, he focused on commercial and official music application rather than on music for social movements.

He continued with commercial music activities as a bağlama artist at TRT Radio Istanbul, where he began working in the late 1960s.

Sağ accompanied diverse artists and also sang his own compositions with other artists during this time. He recorded music he played and sang. The genre of his music is classified in the music terminology today as Arabesque-Phantasy music, which contained folk-music motifs. This indicates that Sağ could not break off with folk music.

Sağ recorded a number of cassette tapes with other musicians in addition to more than ten solo recordings. The serial album titled Muhabbet (“Small talk”), which he recorded with Musa Eroğlu, Muhlis Akarsu, and later Yavuz Top, helped introduce Turkish folk music to broad masses after 1980.

Sağ survived the 1993 Sivas massacre, in which 37 were killed and 51 injured. He had gone to the city to attend a conference of left-wing Turkish intellectuals.

With the support of Roman Herzog, then President of Germany, Sağ gave a concert together with Erdal Erzincan and Erol Parlak, accompanied by the Cologne symphony orchestra, at the Kölner Philharmonie on 5 May 1996.[1] This performance played an important role in introducing Anatolian music by bağlama to the West. Between 21 January and 5 February 2000, Sağ went on a concert tour in twelve European cities with the Spanish Roma flamenco guitarist Tomatito. 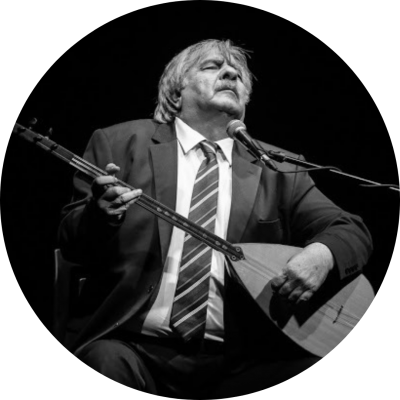