If you’re going to call your band audiobooks, you’d better have some good stories to tell. Stories that should move you and ones to make you move. Stories about real life and surreal life and all that weirdness that you just glimpsed out of the corner of your eye.

Luckily for you, audiobooks really do. The London based duo have developed a unique ability to  conjure up magical aural snapshots that wallop you like bong hits. Each of their discombobulating observations comes stretched out over a series of discomfiting oscillations, like messages from the spirit world or pulp fictions found in a box at the end of your road or a crackling pop broadcast from a far away galaxy;

Out there, across the wavelengths or in the musty pages of their books, there’s a girl who’s lost in lust, sat eating mussels on a South Wales beach; there’s an alcohol-fuelled vision of Hell as a family melts down in an airport departure lounge and there’s a carsick dog in the back of your Grandma Jimmy’s car. There’s womanly blood flowing and there’s friends in your bubble bath and there’s some very large pinches of hot salt.

So who’s telling these stories? Who are the people writing these audiobooks?

On the face of it, Evangeline Ling – a 21 year old art student and musician from Wimbledon – and David Wrench – one of the most in demand mixers and producers in modern music, a sometime cohort of Julian Cope and former denizen of North Wales – might seem an unlikely pairing.  Yet a chance encounter at a mutual friend’s party just one week after David had moved south to the capital very quickly led to an experimental studio session that’s been going on ever since.

A band that takes its cues from the King of Pop and the Antichrist Superstar, creates music in daily automatic writing sessions and rides the neon ley lines that connect of the North Wales coast to the psycho-bustle of after hours London are clearly on a very singular path to greatness – a path they’re already someway down, having taken their first footsteps out of the studio and onto the stage for a handful of truly mesmerizing live shows.

Time, then, to welcome these strange superheroes – this inhuman league – into your life. You might not know it yet but the story is already written. It says audiobooks are your new favourite band. 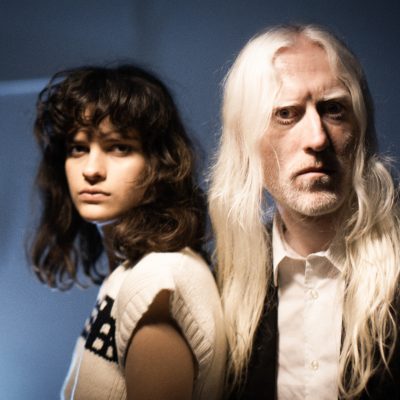