Blue Lab Beats are probably the fastest-rising production duo in the world right now. They’re also an attitude, a conscious way of being. The vibes are strong on everything this London-based pair – producer NK-OK and multi-instrumentalist Mr DM – cook up inside Blue Lab HQ, pulsing through a sound that blends boom-bap grooves and jazz-funk hooks. A supple, wide-ranging sound inspired by the pioneers of hip-hop and the music of the African diaspora; a sound that tells of London, of today, while hinting at the future.

“A lot of our music is instrumental, which makes it more accessible,” says NK-OK, aka Namali Kwaten, 22, of the familiar synths-and-beats style that has earned them extensive radio support, over 25 million streams, live shows at Glastonbury and Afropunk and support slots for the likes of Roy Ayers, Thundercat and the producer/pianist Kiefer.

“We grew up listening to everything from soul, funk and jazz to Afrobeat, highlife and grime,” he offers. “Our parents were always playing this stuff at home; it’s part of the culture of London. We pour all that soul and energy into our releases.”

Which makes sense: having met at youth club music class then graduated from Tomorrow’s Warriors, the famed music education programme dedicated to championing young black British musicians, the duo has been part of London’s tight-knit, much-hyped jazz scene from the get-go.

“We’ve all known each other forever,” says Mr DM, aka David Mrakpor, 27, whose virtuosic ability on keyboards, guitar, bass, drums and more is deployed in incisive solos and instrumental passages meant for sampling, for cutting-and-pasting. “We all have similar tastes.”

A scene where diverse crowds thrill to such sonic mosaics, never sleeping on Blue Lab Beats releases such as 2017 EP Freedom, with its stand out track ‘Sam Cooke & Marvin Gaye’, or 2018’s XOver, a debut album brimming with hits including the six-million-streaming ‘Pineapple’.

Releases such as the 2019 EP Vibe Central, which has features from vocalist Jodie Abacus and Grammy-nominated trumpeter Theo Croker alongside statement track ‘Hi There’, a soulful instrumental sermon that also appears on Blue Lab’s 2020 album, Voyage. That project finds guests including rapper Sampa the Great, hornsman Kaidi Akinnibi and a talkbox-wielding DTsoul bouncing off the remarkable creative chemistry that exists between NK-OK and Mr DM.

“Loads of artists are shocked when they see us at work in the studio,” says NK-OK. “They think we’re actually psychic! Mr DM always knows what I mean and quickly plays what’s needed. Our process just gets faster; now we tend to go with the initial song idea so everything feels more immediate and natural.”

The pair’s mutual understanding of balance, rhythm and melody is obvious on ‘Montara’, a hip-hop fuelled take on the tune by vibraphonist Bobby Hutcherson. The track is their contribution to Blue Note Re:Imagined, a 2020 collection of classic Blue Note tracks reworked by trailblazing young British-based acts.

“To be affiliated with Blue Note, whose artists we’ve grown up with, and whose music and politics have influenced us, was exciting,” says Mr DM. “Now we’re releasing our first Blue Note EP, which is really mad.”

Welcome, then, We Will Rise – a five-track EP created in response to current events. It’s a project from the heart, intended to offer healing and hope to those wearied by racism and prejudice, by the barrage of visual triggers. It’s music that variously celebrates resilience, provides reassurance and – especially on lead single and statement track, ‘Blow You Away (Delilah)’ ft. Ghetto Boy – sparks joy.

“We’d been planning a tour when Covid hit and everything was cancelled,” says NK-OK, who made over 30 beats in lockdown, only taking time out after contracting the virus (as did his sister, mother and father, who was hospitalised).

“We rested. We rehearsed ideas. We did a bunch of features. But our creativity was properly kick-started when the Black Lives Matter movement started again. There were so many violent images being shared, and seeing them on repeat felt damaging for our people. We wanted do a healing blanket of songs.”

The title track came to NK-OK in a dream: “I’d been thinking about the sort of music that people were dancing to in the Seventies, like on [American dance-music TV show] Soul Train but very much now. One night I got up at 3am, programmed the whole song, called it ‘We Will Rise’ then went straight back to sleep. I thought it might sound whack when I woke,” he says. “It didn’t.”

The electro-instrumental ‘Nights In Havana’, which features WizKid/Jaz Karis collaborator Alex Blake on guitar, was inspired by a visit to Cuba and NK-OK’s jam sessions with top Afro-Cuban musicians. ‘Great Lemon’ is a melodic slice of chill whose descending chromatic bass line is akin to a sunset turning orange and pink; the tune is cleverly positioned to offer respite before the EP’s explosive closer ‘Tempting (Dance 2)’ ft. Kojey Radical & DTsoul.

Says NK-OK: “’Tempting’ was an idea we had in a writing session with Kojey around 2015. I updated the drums a bit. Mr DM did some new patches. Then DTsoul brought in the talkbox” – a retro electro-mechanical unit that applies speech sounds onto the sounds of an instrument – “and just fully killed it.”

Killer tunes are the duo’s stock-in-trade. The aforementioned ‘Blow You Away (Delilah)’ is another statement track – a massive four-on the-floor blast of live percussion and driving, building drum beats supplemented by trumpeter Beésau and Kaidi Akinnibi on tenor. All of it overlaid with vocals by London/Accra-based Ghetto Boy, a prince of the spreading Afrobeats scene and an artist whose vocal productions skills left NK-Ok and Mr DM marvelling.

“Ghetto Boy just vibed to the track we sent him,” says NK-OK. “What he sent back was so amazing. He ad-libs, changes tone and shapes words in a way that, with good headphones, feels proper 3D.”

“I’m on guitar and bass and playing marimba patches on keys,” continues Mr DM. “We’d been listening to Burna Boy and WizKid and wanted to incorporate that electronic Afrobeats sound alongside the Afrobeat rhythms we grew up with.

‘Blow You Away (Delilah)’ kind of returns Afrobeats to that Fela Kuti-style Afrobeat sound it came from. It’s a blend, with lots of instruments. You can dance to it. But when you know what’s behind our music you can dance even harder.”

It’s this attitude, this consciousness, which sets We Will Rise apart. That takes Blue Lab Beats deeper and higher on their ever-upward rise, into a future where boundaries are down and optimism and togetherness are a given. “Despite everything that’s happened, we are going to heal,” they say. “We’re going to make it through.” 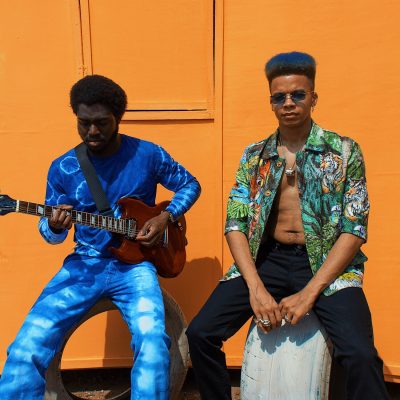