While other MCs struggle to merge rapping with the complex rhythms of drum’n’bass in the late ’90s, the man otherwise known as Delroy Pottinger has already proven himself as one of the few MCs able to comfortably rap alongside some of the top drum’n’bass DJs in Britain. Like many of the other innovative drum’n’bass artists of the early to mid-’90s, he grew up as a teenager interested in breakdancing and the accompanying hip-hop culture characterized by artists such as Run-D.M.C. and Kurtis Blow. From there, it was a natural progression for Pottinger to begin rapping at the DJ parties. Soon, he was making demo tapes made with turntables, drum machines, and a microphone. By his late teens, he began attending local raves in Manchester and Liverpool before he eventually became the resident MC at Club Xtreme, where Pottinger first met Bukem and MC Conrad. It wasn’t long before Conrad personally gave Pottinger a call, asking him to join the Good Looking camp. Since that moment when he became known as MC D.R.S., he has quickly become known as one of the top MCs in the drum’n’bass game, first appearing on Blame‘s Logical Progression, Vol. 2 and then in a more prominent role on that same DJ’s contribution to the Progression Sessions album. In addition to joining the Good Looking DJs during their live performances, Pottinger has also appeared on tracks such as Bukem‘s “Constellation” and also has become known for his role in the label’s live band, Intense. 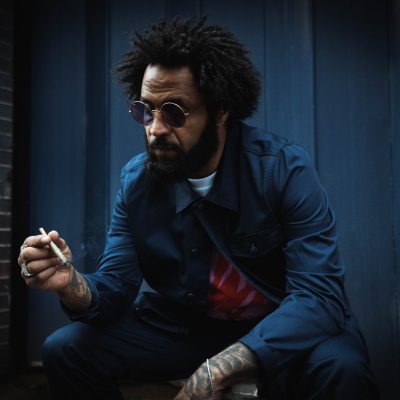