The Dub Pistols’ Barry Ashworth is a fearless soldier working behind the frontlines of the UK’s thriving dance music scene. Barry began his musical journey by working as a club promoter, later heading off to exotic Ibiza where he established two (in) famous club nights: Monkey Drum and Naked Lunch. Partying with the same intensity in which he’s made his bristling music (oh, the stories we’d tell you if we weren’t sworn to secrecy), the Dub Pistols were born in 1996 when Barry – who has also remixed tracks forthe likes of Moby, Limp Bizkit and Filter – solidified his beat-heavy sound.Later that same year, he signed three EPs to England1s Concrete label (There’s Gonna Be A Riot, Westway and Best Got Better) and hasn’t looked back. With the Dub Pistols’ Geffen debut, Six Million Ways to Live, the follow-up to 1998’s critically-acclaimed Point Blank, Ashworth draws upon his broadest musical palette to date. Along with bandmates bassist Jason O’Brien and DJ Stix (who joined the band in 1998), Six Million Ways to Live is a fusion of sounds that are built on tough breakbeats that are bathed with hip-hop, ska, reggae, punk and soul. “The last record was a series of tracks that were really for the dancefloor,” explains Barry. “On Six Million Ways to Live, we wanted to work on a much bigger canvas…We worked more with horns and melody and really got into different types of samples and time signatures.” Rappers Planet Asia and Sight Beyond Light, featuring long-time collaborator T.K. Lawrence, lend their vocal skills and lyrical wisdom to the Pistols’ complex musical gumbo. Also in the mix are veteran vocalists Terry Hall of The Specials on “Problem Is” and Horace Andy of Massive Attack [“Crazy”], who contribute heavy ska sensibilities recalling the second and third waves of the modern ska invasion. “When you’re in a band and you work with the same four or five guys all the time, you’re going to get tired very quickly,” says Ashworth. “We worked with amazing musicians who bring new ideas to the process and it’s always exciting. Working with Terry Hall and Horace Andy was unbelievable. Just the same, up and coming musicians like the guys in Sight Beyond Light are incredible, too. And Planet Asia-this bloke-is totally bang on. When you listen to their music separately, it’s completely different than ours. But when you combine what they’re doing with our music, something new and different comes out of the process.” Although critics and other musical pundits may twist themselves into knots figuring out where to place the Dub Pistols, Barry Ashworth and company are sure to stay a step ahead and take aim at any boundary or definition placed on their sound and probably throw a turntable or two at it like a Fender stuffed up the tweeter of a Marshall stack. The Dub Pistols: this ain’t no party, this ain’t no disco, this definitely ain’t no foolin’ around. 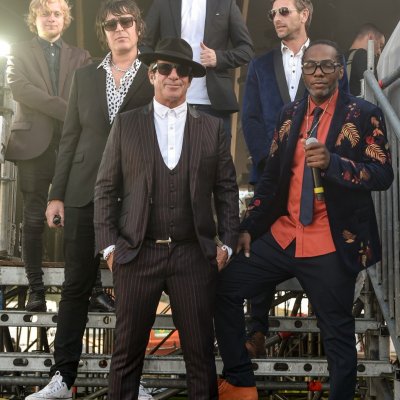