Horsey are a band from South East London consisting of Theo McCabe, Jacob Read (Jerkcurb), Jack Marshall & George Bass. They are the current incarnation of the same group of friends that have been playing music together since childhood.

From the glitzy gold sequinned jackets they sport onstage to the surreal, noodling, apocalyptic jazz they tout, Horsey are intoxicatingly odd. Their tracks meander through chintzy piano, to shouty call and response heckles to – on occasion – something resembling a rock opera. Despite keeping a fairly low profile in terms of press and releasing only a handful of tracks ( including 2017’s Park Outside Your Mothers House, & 2019’s Bread & Butter, released on Tokyo’s Big Love Records), the group have built up a firm cult following, touring with friend & collaborator King Krule and selling out none-too-small venues in their hometown. 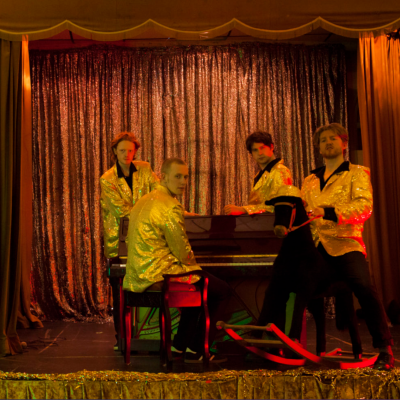