John is a comedian and broadcaster based in London.  He presents a weekly show on Radio X alongside friend and fellow comedian Elis James. ‘The Elis James and John Robins Show’ podcast has gained them a devoted following, it has received over 25 million downloads and is a regular fixture in the podcast charts. In 2017 they won The Chortle Award for Best Radio.

John began performing stand-up in 2005 and was an alumni of the legendary ‘Bristol Comedy Flat’ alongside Russell Howard, Jon Richardson and Mark Olver.

He took his first solo show to the Edinburgh Festival in 2009 and for the next eight years became one of the best reviewed stand-ups at the fringe. In 2014 he won the ThreeWeeks Editors Choice Award for his show ‘Where Is My Mind?’. He performed his 2015 show ‘This Tornado Loves You’ at the New Zealand International Comedy Festival, and was part of the Best Of The Edinburgh Festival showcase in Adelaide and Brisbane Comedy Festivals.​

In 2017 he won the prestigious Edinburgh Comedy Award (formerly The Perrier Award) for his show ‘The Darkness Of Robins’. In 2018 he took the show on a 68 date UK tour which included a sell-out performance at London’s Hammersmith Apollo.​

John has also appeared on shows for Radio 4 including The Now Show and The News Quiz.

In 2016 Elis and John announced their first major live appearances together. ‘The Elis James and John Robins Experience’ saw them bring their unique chemistry to venues up and down the country. Demand was unprecedented and tickets for London’s Shepherd’s Bush Empire sold out in a matter of hours. They have since published a book ‘Elis and John Present: The Holy Vible’ which you can buy here

Known for his honesty, charm and lightning quick improvisation John won the Chortle award for Best Compere in 2015. John has also provided television and radio voice overs for companies such as Ford and BT Sport.

John is a renowned expert on the rock band Queen, and was asked to warm up the crowd for their 2014 New Year’s Eve broadcast on the BBC. It is an event he will remember until his dying day. 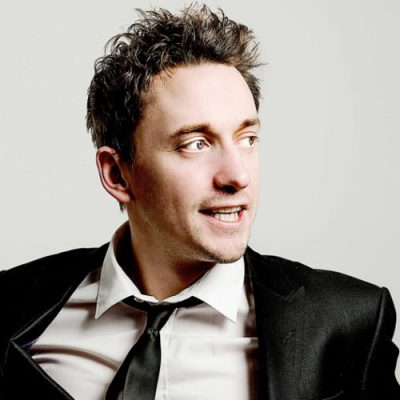