The name Pantha Du Prince came to Hendrik Weber in a dream. It would have had to: The Berlin-based techno composer-producer (whose moniker is French for “the panther of the prince”) makes some of the otherworldly electronic music around. It’s dreamy, but not somnambulant: his last album, The Triad, pulsates hypnotically, drawing the listener into a rich, uncanny whole that keeps revealing new layers with each listen.

“It’s a fantasy character,” Weber explains of the alias. “For me, the name is an open metaphor for a certain atmosphere I want to transmit — a poetic transporter for the concept behind the music. There is a certain romanticism in it. I try to find something that combines ear, eye, body, feet, and all the other senses, and also transcends these senses and brings them back into a holistic experience. It’s an entry into a world that is fantastic, but also very down-to-earth.”

Weber has carved out a unique space, not only in electronic music, but also the indie world generally. An early star of the influential Berlin dance label Dial thanks to the stunning one-two of Diamond Daze (2004) and This Bliss (2007), Pantha Du Prince made the leap to Rough Trade for 2010’s breakthrough Black Noise, which featured a notable cameo from Noah Lennox, a.k.a. Panda Bear of Animal Collective, on the single ‘Stick to My Side.’

The collaboration made a wider audience aware of what dance fans already knew: For all his floor-ready beats and theoretical approach (“A rave party for me is a psychosomatic organism,” offers Weber, whose background is in art history), Pantha Du Prince’s makes deliciously, approachably melodic music, full stop. “It’s layered and cinematographic,” says Weber. “I enjoy dancing very much, and I enjoy going through certain experiences of physical expression. At the same time, it’s not brainy music. It should work on all levels.”

Composed and written for an ensemble of three musicians, his latest release Conference of Trees undertakes a number of sound experiments to give resonance to the communication of trees. The live ensemble use hand-crafted instruments to explore the sonic characteristics of different woods amid an immersive stage setting, combining avant-techno, visual poetics and speculative science. 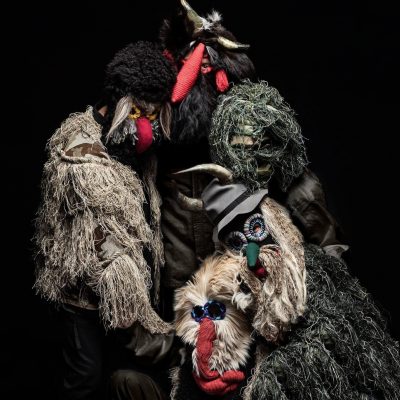