In a business where it’s safer to remain inscrutable or blankly upbeat, Sasha Keable’s commitment to the truth is a tonic. Forthright and unapologetically emotional, like all the greatest soul singers, the South London star pours real life pain and joy into her performances, communicating with listeners in a manner that feels both courageous and innately empathetic. As a result, Keable displays both a talent and an artistic authenticity comparable to that of the late, great Amy Winehouse.

Just as impressive is the tenacity and strength of character the 27-year-old has shown in getting to this point, navigating not just the mental health struggles that have plagued her since primary school, but unsolicited attempts from various music industry figures to shape her into a more pliant, pop-focused proposition. As the lithe, jazz-tinged soul on her new, seven-track EP, Intermission, proves, she was right to resist any interference and keep the courage of her convictions.

Written and recorded prior to the first lockdown of 2020, Keable’s first collection since 2019’s Man EP finds her contemplating the collapse of a romantic relationship while simultaneously celebrating her newfound – and hard-won – self-acceptance in lines like, “Never knew love, but I found love in myself.” Though she sounds utterly at home today in her identity as an artist, her path here has been anything but straightforward.

Keable has had a long journey with her mental health and credits the process of recording her feelings as her initial route into songwriting. “Slowly, throughout the years, it became more like poetry, and then it turned into songs. A lot of people say that music is like therapy, but it truly is what keeps my mind ticking over. Sometimes I struggle with communicating exactly what I mean in conversation, and I always feel really grateful that, no matter what, when I’m writing music I can communicate.”

Born and bred in South London, Keable’s artistry is inextricable from the city she loves, boasting collaborations with local players like Katy B and Rinse FM-founder Geeneus, and a loyal fan base that have sold out venues on both sides of the river. Her early years were spent in Eltham and Tooting, and she fondly recalls her homelife as a melting pot of musical influences, from the Cumbia and Vallenato so beloved by her Colombian mother, to her older sister’s R&B leanings and her step-father’s passion for house music, which resulted in him buying the then-10-year-old Keable her own set of decks. Most significant was the introduction to Donny Hathaway and Stevie Wonder that she received via her uncle, leading to an enduring love of Motown and 70s soul that has helped shape the artist she is today.

Feeling a fish out of water at secondary school, at 14 Keable applied and was accepted to study Music at Croydon’s prestigious BRIT School, entering the same year group as Ella Eyre, Jamie Isaac and King Krule. Today she describes the experience as “some of the best days of my life.”

Despite a long journey within the music industry which sometimes left Keable battling to make the music she wanted to make, with the benefit of hindsight, today she’s finally able to acknowledge her many achievements. Amongst those were a series of hit collaborations with Disclosure, Zinc, Snakehips, and her close friend Katy B, and the release of her own acclaimed EPs Black Book and Lemongrass and Lime Leaves, in 2013 and 2014 respectively. “When I look back at those releases, I’m now able to feel proud of them,” she says. “All of it was part of the process in helping me find the sound that I have today.”

Having taken time to regroup, Keable returned in the spring of 2019 sounding reinvigorated, sharing the independently-released MAN EP. Today, she credits the collection for reigniting her passion for music, documenting as it does the moment she truly found her sound. “It almost felt like my first EP. It felt like I was fully myself, and I didn’t have to pretend to be something I wasn’t to try to impress management. It was just completely my project and it was like finally I was the artist that I wanted to be.”

Two years on, she’s stepped up another gear entirely with Intermission, exec producing alongside James Smith, and creating her most cohesive collection to date. Initially written on piano and recorded with a live band, the record’s timeless, jazz-inspired arrangements incorporate bursts of warm brass and tender string arrangements while never once overshadowing the star-attraction: Keable’s truly astonishing vocals.

Just seconds into first single ‘Exception’, it’s clear that Keable’s smoky vibrato has lost none of its power to wow, striking a perfect balance of innate soulfulness and expert musicianship. On ‘Killing Me’ she takes turns leading and harmonising with close friend Jorja Smith to spellbinding effect, while her emotive performance on haunting ballad ‘My Mind’ is enough to break the very steeliest of listeners. Throughout, the EP finds her ricocheting between feelings of infatuation, despair and empowerment, in a manner that will feel painfully familiar to anyone who has ever experienced the messy collapse of a long-term relationship.

“I’m just trying to be as honest as possible,” Keable smiles of her subject matter. “And this EP really does sum up the last two years for me, battling between missing someone and feeling happiness by myself. I had to learn to appreciate myself without someone else next to me.”

When asked what she hopes listeners take from the collection, she answers without hesitation. “I hope they just take a lot of honesty. Writing this EP was probably the most vulnerable I’ve felt. It took a lot out of me. But I don’t mind being vulnerable if that allows other people to discover something about themselves that they didn’t know.”

It’s the sort of fearlessly frank response we’ve come to expect from Keable: an open book, a work in progress, and one of the most exciting British artists of her generation. 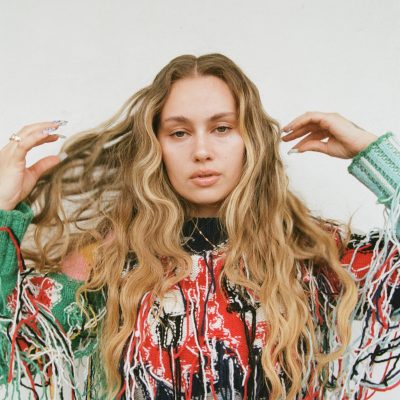