Stewart Lee began writing and performing stand-up at the age of 20, having been inspired, as an impressionable teenager, by seeing the post-punk anti-comic Ted Chippington open for The Fall in Birmingham in 1984. In 1990 he won the Hackney Empire New Act Of The Year award and for the next five years he contributed to various BBC Radio comedy shows, including Fist of Fun and On The Hour, with Steve Coogan and Chris Morris. He performed as a stand-up almost nightly on the London comedy club circuit throughout the ‘90s, and co-created two programs for BBC2 with Richard Herring.
Stewart directed the Mighty Boosh’s breakthrough Edinburgh show, Arctic Boosh (1999), Simon Munnery’s Golden Rose Of Montreux nominated BBC2 show, Attention Scum, (2000), and a revival of Eric Bogosian’s Talk Radio (Underbelly 2007). In 2001 he was invited to help write the libretto of, and direct, the composer Richard Thomas’ developing work, Jerry Springer The Opera, at Battersea Arts Centre. The show won four Olivier awards after its National Theatre run, though its commercial future was curtailed by the right wing pressure group, Christian Voice.

Stewart’s subsequent three stand-up tours, 2004’s Stand-Up Comedian, 2005’s 90s Comedian, and 2007’s 41st Best Stand-Up Ever, consolidated his live audience and critical standing and contributed to BBC2’s decision to commission his 2009 series, Stewart Lee’s Comedy Vehicle. This was followed by the stand-up tours, If You Prefer A Milder Comedian Please Ask For One (2009), and Carpet Remnant World (2011), and three more series of Comedy Vehicle for BBC2, the fourth airing in 2016. The second series won a BAFTA and two British Comedy Awards, though the same panels overlooked the superior third series, and all the series won Chortle awards.

Stewart is also the author of the stand-up studies How I Escaped My Certain Fate (Faber and Faber 2010) and If You Prefer A Milder Comedian Please Ask For One (Faber and Faber 2012), and the theatre pieces Pea Green Boat (Traverse/BAC 2002), What Would Judas Do? (Bush/BAC 2007), Johnson and Boswell, Late But Live (Traverse 2007), and Interiors (Manchester International Festival 2007, with Johnny Vegas and Rob Thirtle). He has hosted radio documentaries on Native American Clowns, Satanic music, free jazz, psychedelic pagan kids’ TV, Radiophonics, and Morris Dancing, and was the on-screen interviewer in Antoine Prum’s elegant improvised music documentary, Taking The Dog For A Walk (2014).

Stewart is a patron of the arts radio station Resonance 104.4 FM, has written on music for The Wire, Bucketful Of Brains, Uncut and Mojo, and performs in an irregular trio interpreting John Cage’s Indeterminacy with Steve Beresford and Tania Chen. He won Celebrity Mastermind answering questions on the guitarist Derek Bailey, pedalled a swan pedalo in Andrew Kötting and Iain Sinclair’s film Swandown (2012), and recently performed a folk song on a Shirley Collins tribute album. He is also the voice of a Tarantula spider in an exhibit at London Zoo. Stewart has two children and has lived in Stoke Newington, Hackney, London since the 1990s. 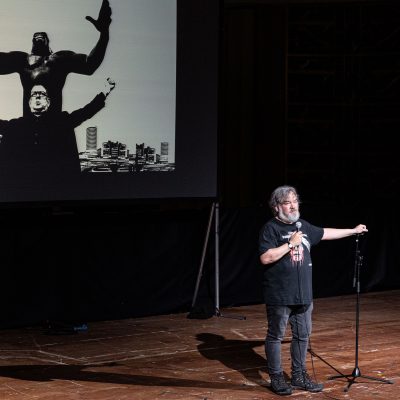