Bandleader, composer, arranger, keyboard player, poet, philosopher, and cosmonaut Sun Ra advanced jazz into the space age. Through his elaborate concerts, films, and countless recordings, he fused imagery and mythology related to ancient Egypt as well as science fiction, planting the seeds for what would eventually be referred to as Afrofuturism. Ra’s music encompassed nearly every style of jazz, with roots in ragtime and swing to bebop and avant-garde jazz. Initially active as a blues pianist, he worked with swing musicians such as Coleman Hawkins during the 1940s, then established his own trajectory during the ’50s, when he founded the ever-changing ensemble known as the Arkestra. Establishing their interstellar mystique, the group sported futuristic costumes during their outlandish performances, and recorded constantly, issuing records through Ra’s independent label El Saturn Records, often with misleading or nonexistent liner notes. During the 1960s, the Arkestra released landmark albums such as The Heliocentric Worlds of Sun Ra, Vol. 1 (1965) and Atlantis (1969), groundbreaking in their shifting away from conventional melody and harmony, as well as their usage of synthesizers and electronic keyboards. Ra’s surrealist sci-fi epic Space Is the Place, preceded by an unrelated album of the same title, was released in 1974, subsequently becoming a major cult classic film. Later concerts and recordings by Ra incorporated swing standards and even tunes from Disney movies, but maintained a heavy degree of improvisation, and remained highly unpredictable. The Arkestra has continued to perform since Ra’s passing in 1993, and he remains a crucial influence on all forms of creative, forward-thinking music.

Born Herman Sonny Blount in Birmingham, Alabama (although he claimed he was from Saturn), Ra led his own band for the first time in 1934. He freelanced at a variety of jobs in the Midwest, recording with blues singer Wynonie Harris in 1946 and working as a pianist/arranger with Fletcher Henderson in 1946 and 1947. He also performed with swing musicians Coleman Hawkins and Stuff Smith in 1948, but really got started around 1953. Leading a big band (which he called the Arkestra) in Chicago, Ra started off playing advanced bop, but early on was open to the influences of other cultures, experimenting with primitive electric keyboards, and playing free long before the avant-garde got established. Following several singles, including songs recorded with doo wop and R&B vocal groups such as the Qualities and the Cosmic Rays, early albums released by the Arkestra on El Saturn Records included Super-Sonic Jazz and Jazz in Silhouette. Jazz by Sun Ra, Vol. 1 also appeared on producer Tom Wilson’s Transition Records.

After moving to New York in 1961, Ra performed some of his most advanced work. This period saw the release of The Heliocentric Worlds of Sun Ra, Vol. 1 and Vol. 2, both on the famed ESP-Disk label, and often regarded as some of his best work. In 1966, the Arkestra had a weekly Monday night gig at Slug’s Saloon, a jazz club in the Lower East Side in Manhattan, which greatly increased his fan base among beatniks and music critics. While Ra’s music, mythology, and appearance went over the heads of many listeners and audience members, he was praised by jazz legends Dizzy Gillespie and Thelonious Monk.

In 1968, he relocated his group to Philadelphia, and the band undertook their first tour of the West Coast of the United States, exposing their elaborate performances to hippies and Deadheads. Ra was featured on the cover of Rolling Stone in 1969. The ensemble began performing in Europe in 1970, and they traveled to Egypt for the first time in 1971. Their concerts alternated free improvisations and mystical group chants with eccentric versions of swing tunes, sounding like a spaced-out Fletcher Henderson orchestra. Many of Ra’s most important sidemen were with him on and off for decades (most notably John Gilmore on tenor, altoist Marshall Allen, and baritonist Pat Patrick).

In 1972, Sun Ra recorded an album called Space Is the Place, as well as an experimental science fiction movie of the same name. The album, led by the 21-minute title track, was released in 1973, and endures as one of his most popular and influential works. The film, directed by John Coney, was released in 1974, and is often cited as a seminal work of Afrofuturism. The Arkestra recorded an original soundtrack for the film (unrelated to the Space Is the Place album), and it was eventually released on CD in the ’90s.

The Arkestra continued recording and performing, and albums appeared on labels large (Impulse!, Atlantic) and small (Philly Jazz, Sweet Earth Records). Releases on Y Records, including the infamous Nuclear War (1982), exposed Sun Ra’s work to post-punk/indie audiences. Ra became a fixture of Philadelphia radio stations and regularly gave lectures. After appearing on Hal Willner’s Disney tribute album Stay Awake in 1988, Ra became obsessed with the music of Disney animated films, and incorporated renditions of these tunes into live performances. Ra suffered a stroke in 1990, but he still continued to lead the Arkestra and compose music. Gilmore led the Arkestra on dates when Ra was too ill to perform. Ra died in 1993, and Gilmore led the Arkestra until his death in 1995, at which point Allen took over.

Ra has been well served by Evidence’s extensive repackaging of many of his Saturn dates, which have at last been outfitted with correct dates and personnel details. The label released a double-CD collection of his limited single releases in 1996. Posthumous albums of live material have appeared on labels such as DIW, Leo Records, and Kindred Spirits. In 2010, Norton Records released a series of “Space Poetry” LPs containing Ra’s spoken word material. U.K. label Strut also released a few notable compilations, including In the Orbit of Ra (presented by Allen) and To Those of Earth… and Other Worlds (mixed by Gilles Peterson), as well as a more extensive compendium of his singles. 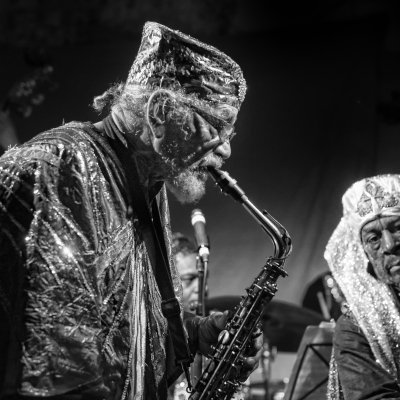