New Year’s Eve 2018: The four members of the Magic Gang are at a party celebrating the promise of the year ahead. For guitarist/vocalist Jack Kaye, it’s the ideal night. Hitting the dancefloor, he and his friends share an unspoken connection which silently summarises their entire relationship. He overhears an argument, but even that fails to distract from the magic of the moment.

His bandmate, guitarist/vocalist Kristian Smith, had also arrived in high spirits. But in contrast to Jack, his evening spiralled downwards into friction and recrimination.

The next morning delivered the usual mix of guilt and regret. Yet in time, it also resulted in two of the stand-out moments from The Magic Gang’s buoyant second album ‘Death of the Party’. Unbeknown to each other, the pair both wrote their own perspectives on the night.

Kristian’s viewpoint, the jangly power-pop title track, remembers, “Everyone around me wants to see us fight / And if you keep on pushing me then you know that I might.” On the other hand, ‘Make A Sound’, Jack’s mirrorball disco-groove, is pure party vibes… aside from that argument. “I hope it’s not my friends,” he sings, “’Cos that could fuck up a good night.”

Those two songs are representative of the themes that permeate the album. As Jack notes, “Half the songs were about going out, dancing and having a nice time with your friends, and the other half were quite introspective and self-examining.” The album charts a similar course: an initial rush of melodic firecrackers giving way to the relative comedown of the final three tracks.

‘Death of a Party’ is the second chapter in The Magic Gang’s story. Their self-titled debut album achieved more than they ever thought possible. Hailed as one of the best debuts of 2018, the band played all over the world and earned award nominations from NME and Q.

When it came to record two, however, they aimed to broaden the scope of their harmony-rich, melodically focused pop. And inspired by Lou Reed, Alex Turner and especially Jonathan Richman they wanted to take a more observational lyrical approach. After all, recalls bassist/vocalist Gus Taylor, “Our debut was twelve love songs.”

First time around, The Magic Gang extended their student years by living together in Brighton. In the wake of their debut, they moved back to their parents’ houses and then onto various parts of London (although Gus remains in Brighton). Sure, they’re in a successful band, but they share the same anxieties about money, relationships and the future as many of their early-twentysomething contemporaries.

“Permanence isn’t much of a thing and that’s a scary concept,” admits Gus. “Half your pay cheque goes on rent every month. People are working week in, week out, but the idea of having a family someday or buying a house seems impossible.”

Those experiences fed into the lyrics. As Gus continues, “You look forward to good times with loved ones and we have a brilliant set of friends. It’s the constant ebb and flow of enjoying yourself so you don’t get down about other things.”

The album’s increasingly foreboding closer ‘(The World) Outside My Door’ explores Jack’s personal experience of an issue that will remain dominant for generations to come. “That was written while the Extinction Rebellion protests were happening around London,” he remembers. “I had this real sense that everybody around me was taking part in history while I was holed up in my bedroom trying to write an album. It’s quite a guilt-laden song; that feeling that you should be doing more.”

While these songs are rooted in reality, the band’s patented playfulness provides a lighter touch too. One such idea started on a night out, where Jack loved an old disco song so much that he rushed over to the DJ to find out what was. He spent so much time enthusing about the song (‘Pretty Baby’ by Sister Sledge) that Kristian was inspired to write the love-of-the-music anthem ‘Turn Back The Track’.

As thoughts turned to recording, the band called on the Grammy-winning producer Ben H. Allen. His work in alternative (Deerhunter, Animal Collective) and pop (Gnarls Barkley) being the perfect match for their own genre hybrid.

During a scorching hot month at his studio in Atlanta, they recorded the album and immersed themselves in a music scene that they’d admired from 4000 miles away. On the first night, Allen took them to see Deerhunter play a home town show. They also saw local post-punks Omni who feature Frankie Broyles, who they’ve long admired for his work with Balkans.

“It was surreal being into all of those bands and then going to the place where they all spawned,” recalls drummer Paeris Giles. “It seems to be quite a sect of like-minded people there, and it’s not too dissimilar from Brighton when we started out.”

Allen’s maximalist, experimental style benefited the band’s open-minded sonic palette. Their fiery live sound often became groove-laden, with disco spilling into ‘Take Back The Track’ and ‘Make A Sound’. Elsewhere, ‘Gonna Bounce Back’ hits somewhere between slacker rock and post-punk, while the piano, strings and vocal harmonies on ‘I Am Sunshine’ recalls their love of Brian Wilson and The Beach Boys.

The album’s lead single ‘Think’ marks an exciting return for The Magic Gang. Its soaring horns and echoes of Northern Soul and The Style Council add a fresh flavour, but the energy, insistent hook and backing vocals are everything that fans have come to love from the band.

It’s a cautionary tale, says Kris. “It’s about avoiding conflict and reminding yourself not to make things difficult at everyone’s expense. I wrote it because I was feeling guilty about making my friends feel uncomfortable.”

Despite its foreboding title, ‘Death of the Party’ is a celebration. Four friends have navigated their late teens and early adulthood together, enjoyed success against all odds and are now back and doing it all over again – but better. And the fans have grown with them, their reward being a record that pays back the devotion that they’ve shown.

“When we started we were buzzing if a blog posted about our music,” concludes Gus. “It was all about getting people to listen to it. And that still stands today. Now we want to push ourselves in every single way.” 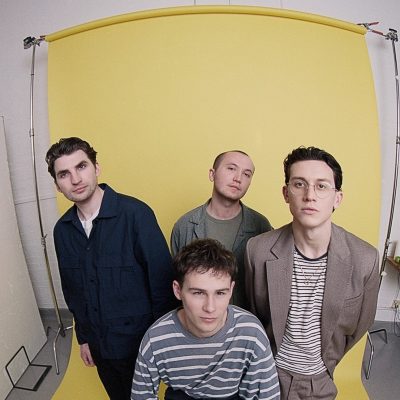