Having shaped a colourful career as a music journalist, broadcaster and DJ, to say that Tina has a good ear for music is an understatement. Her knowledge spans from pop to house music to classical – with a niche for jazz. In fact, Tina has been at the forefront of the ‘UK Jazz explosion’, seeing artists like Ezra Collective, Kamaal Williams and Mercury-nominated Sons of Kemet coming to the forefront of popular music.

So trusted is her taste that Tina is regularly asked to programme stages at various festivals including two of the world’s biggest for new music; The Great Escape in Brighton, UK and SXSW in Austin, Texas. Back in London, she hosted and produced Balcony TV for five years, a Youtube platform that scouted the best new artists – including an unknown Ghetts, Jessie J and Ed Sheeran – which was also developed into an 8 part TV series. On screen, Tina has also voiced and scripted bulletins for 4music and Heat TV, and talked about feminism and the W.I to BBC Newsnight.

Back to music, Tina’s impact goes beyond that of tastemaking. She co-founded CHICAGOxLONDON, a series of events which saw more than 20 musicians from across the Atlantic come together at the iconic Total Refreshment Centre. Its goal was to strengthen ties between Jazz musicians in the two cities. It worked; 18 months later, various albums and recordings have resulted from those two days in 2017, with one of the albums – by rising musician Ashley Henry – set to be released via Sony this year. With the live event having been repeated in 2018, CHICAGOxLONDON has been nominated twice for ‘Live Experience of the Year’ at the JazzFM Awards.

A talented DJ, Tina has played around the world in cities including Chicago, Paris and Singapore, from 2000 cap venues to intimate spots like Ronnie Scott’s Jazz Club and LGBTQ+ spaces. Between shows, Tina writes for various music magazines including Downbeat, Clash and Bandcamp.

Currently, Tina works with Love Supreme Jazz Festival, hosting the Supreme Standards podcast, writing articles and programming monthly live gigs. She’s also writing a book on the connections between neurodiversity and music, inspired by her own adult diagnosis of ADD. 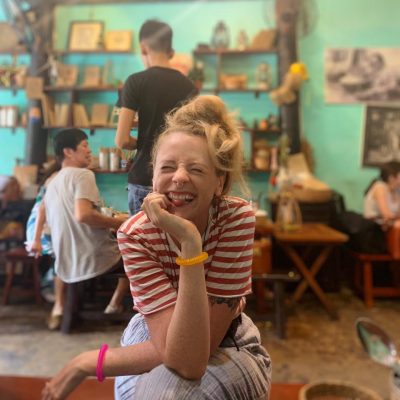